NEW ORLEANS, May 21, 2019 /PRNewswire/ — Medisafe, the personalized medication management platform with over five million users worldwide, announced today that further findings from its ongoing scientific study conducted by IQVIA will be presented at the International Society for Pharmacoeconomics and Outcomes Research (ISPOR) 24th Annual International Meeting in New Orleans, LA.  The meeting draws more than 4,000 health economics and outcomes research (HEOR) thought leaders and stakeholders from over 70 countries and is one of the world’s largest conferences for pharmacoeconomic and outcomes research.

Twelve months after joining Medisafe, hypertension and depression patients were twice to three times as likely to be persistent than their matched control counterparts (Table 1). Over time, the difference in the therapy continuation rate between app users and controls continued to widen across all three therapeutic areas (Figure 2). 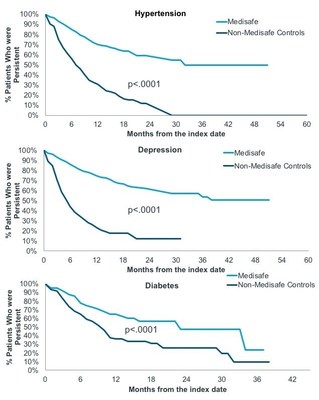 “By isolating and closely studying the cohort that was non-adherent pre-Medisafe, we now have our most promising evidence to date that Medisafe plays an instrumental role in getting chronic patients to refill their medications more often,” said Jon Michaeli, Executive Vice President at Medisafe and a contributing author of the research. “To improve outcomes, it is also critical to keep chronic patients on therapy longer, and we are pleased that Medisafe was able to demonstrate great success here as well.”

To calculate changes in refill frequency, patient pre-app MPRs were compared to their post-app MPRs. To calculate differences in therapy duration, Medisafe app user persistence was compared to that of non-app users (controls) based on comparable points in time in their treatment. App users were matched one to three to controls with pre-index MPR <0.8 in the same therapeutic area and claims in the same month as the app user.

A contributing author from IQVIA will present the study poster (PMU106) on May 21, 2019 from 6 to 7pm EDT during the conference poster session.

The study abstract is available on the ISPOR website and will be included in the ISPOR publication Value in Health, Volume 22, Issue S, 2019 May (Evaluating the Ability of a Mobile Medication App to Improve Adherence in a Chronically Non-Adherent Population in Hypertension, Diabetes and Depression, McGuiness CB, Michaeli J, Wang X, Wade RL).

Medisafe is the personalized medication management platform addressing non-adherence across a care journey, a $300 billion problem in the US alone. Medisafe’s cloud-based mobile platform personalizes content, resources and interventions — such as educational videos, coupons and motivational messages — based on each user’s regimen, condition and specific circumstance. Medisafe fosters collaboration among patients, their loved ones and healthcare professionals through caregiver tools and reports, and helps the healthcare professionals improve health outcomes and sustain quality care initiatives. Medisafe’s almost five million registered patient and caregiver users have recorded over one billion successful medication doses on their iOS and Android smartphones and tablets and contributed 200,000 user reviews that average 4.7 out of 5 stars in the App Store and Google Play app stores. Medisafe is a HIPAA and GDPR compliant solution and ISO 27001:2013 certified.