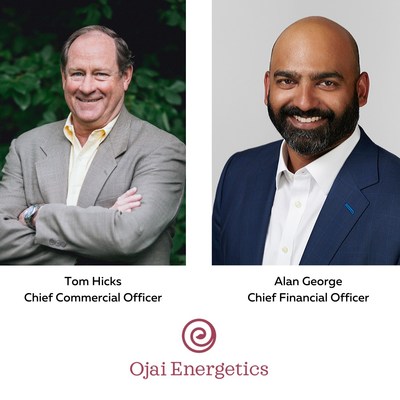 “We are excited to announce the latest C-suite additions to the Ojai Energetics leadership team,” said Will Kleidon, CEO and founder of Ojai Energetics. “Tom and Alan bring a wealth of connections, experience, and a proven track record to take Ojai Energetics to the next level as a category leader.”

“We were also impressed with the company’s social conscience,” said Hicks. “Ojai Energetics is a certified B-corporation, supports fair trade, sources organic and is focused on addressing a number of critical issues including energy storage and addiction treatment.”

From Procter & Gamble to Naked Juice, Monster Energy and Now Ojai Energetics
Hicks comes from his post as EVP of Impact Group, where he assisted with the mergers and acquisitions of 14 companies and helped build the third-largest SMA in the United States. He has also served as Senior VP for Hansen’s Beverage Co. (a division of The Coca-Cola Company and previously Monster Energy Company), CEO of Dr. Sears Family Essentials, and President of Naked Juice. Previously, he worked at Procter & Gamble and Frito Lay.

From JPMorgan to Monster Energy, e.l.f. Cosmetics and Now Ojai Energetics
George comes directly from his position as Vice President of Finance at TPG Growth-backed e.l.f. Cosmetics, where he was a key member of the leadership team that drove significant growth in revenue and profitability, leading to a highly successful IPO. Previously, George has served as Head of Finance and Business Development at Hansen’s Natural (a division of The Coca-Cola Company and previously Monster Energy Company), a U.S. Army Special Forces operator, private equity investor at the consumer-focused firm of North Castle Partners, and an Investment Banking Analyst at JPMorgan.

Growing Top Line Revenue, Healthy Bottom Lines
Hicks and George are no strangers to the beverage industry—or one another. In his role evaluating and executing M&A transactions at North Castle Partners, George worked closely alongside Hicks and his team at Naked Juice through the brand’s successful turnaround and acquisition by PepsiCo. In 2003, Naked Juice was losing money and on the verge of bankruptcy. The following year, Naked Juice generated positive cash flow and significantly grew profitability through to the time of sale in 2007. Mr. Hicks also grew top-line revenue three-fold while maintaining a healthy bottom line, and added over 250 jobs.

“Alan George and I are what you would call a battle-tested team,” Hicks said. “We’ve proven in a variety of situations across different brands over the last 20 years, an ability to combine our skill sets for maximum effect, working together effectively to build high-performance teams and execute incredibly impactful, revenue and profit-generating strategies, even turning around struggling brands.”

Leveraging Relationship and Trust with CBD Technology
The pair worked together again at Monster Energy in building the non-energy brands that were ultimately acquired by The Coca-Cola Company in 2014. As SVP for Hansen’s Natural, Hicks had national responsibility for managing P&L activities for all Hansen’s brand products. At the time, George was Head of Finance and Business Development, where he led several planning and cross-functional business optimization initiatives that resulted in a significant increase in divisional contribution margin. The duo was also responsible for integrating Hansen’s business with Coca-Cola after it was acquired from Monster Energy Company.

“I’ve truly enjoyed working with Tom. I think the ways in which we challenge one another, collaborate and consistently find the alignment that produces the best financial results is a valuable asset for the brands we serve,” said George. “We are excited to bring this shared experience and our track record to partner with Ojai Energetics, a company that we’ve come to admire and respect for its unique positioning in the CBD industry.”

“Alan and I know how to build winning teams and organizations, and we chose Ojai Energetics because it has already established itself as the science and technology leader in the industry,” Hicks said, adding that he spent nearly two years evaluating the position. “I met with over 20 CBD companies looking for representation, but never met another with Ojai Energetics’ technology and patent protection.”

George added, “At this stage in our careers, I think we were both looking for an opportunity to work with a brand that offers something more. We continue to be impressed that Ojai Energetics is a proven vehicle in a relatively new industry, and they also have a social conscience. They’re serious about changing the way society deals with a number of serious issues, including energy storage, pain, and addiction. The company has developed a significant amount of intellectual property to address these and other critical issues.”

Ojai Energetics is a certified B-corporation that supports fair trade, sources organic, and operates its own genetics farm in Oregon. They are creators of Full Spectrum Hemp Elixir, the most bioavailable and advanced micro-encapsulation process in the industry. Their proprietary method of encapsulating CBD oil in water is the most effective delivery system of CBD available. Ojai Energetics’ Founder and CEO Will Kleidon serves as Chairman of the California Hemp Council (CHC), the leading voice for the California Hemp lobby. The organization advocates for legislation to allow CBD in food and beverages in the restaurant industry. 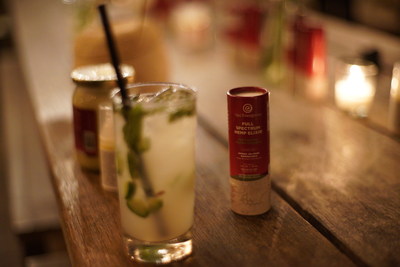