TACOMA, Wash., Dec. 11, 2019 /PRNewswire/ — Starlight Children’s Foundation, the organization dedicated to delivering happiness to seriously ill children and their families, and Nintendo of America today announced the newest addition to the nonprofit’s popular Starlight Gaming program: the Starlight Nintendo Switch gaming station. The new gaming station was unveiled today at Mary Bridge Children’s Hospital in Tacoma, Washington, where patients joined kids and families from the community for an event celebrating the 27-year partnership between Starlight and Nintendo of America. 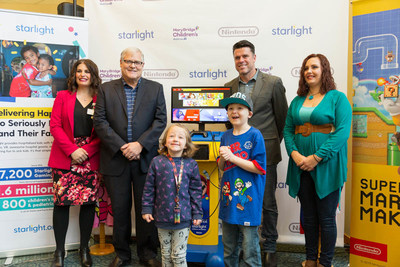 “We’re incredibly excited to unveil the new Starlight Nintendo Switch gaming station and celebrate our 27-year partnership with Nintendo of America,” said Adam Garone, CEO, Starlight. “Over the years, Starlight Gaming stations have provided millions of seriously ill children with the healing power of play, entertainment, socialization, and emotional support, and have helped to normalize an otherwise scary situation or setting for families. We’re so grateful to Nintendo and their employees for such a long and continuing partnership fueled by innovation, impact, and generous support.”

“It’s been our pleasure to work with Starlight and observe them bringing happiness to kids when they need it the most,” said Don James, Nintendo of America’s Executive Vice President of Operations. “As with everything we do, we hope the new Starlight Nintendo Switch gaming stations will put smiles on the faces of children and their families.”

The new Starlight Gaming station features the popular Nintendo Switch system and is specially designed and manufactured by Nintendo of America for use in a hospital setting. The device can be completely cleaned with disinfectant to meet a hospital’s strict safety infection protocols and includes a mounted playback monitor that can roll anywhere in a hospital so children can enjoy some of their favorite Nintendo video games from the comfort of their own hospital beds or in a playroom with a group of other children.

Doctors, nurses, clinicians, and child life specialists are able to use a single Starlight Gaming station in a variety of settings, from entertaining children during a relative’s visit to the emergency room, to distracting kids during an otherwise painful medical treatment, to giving kids something fun to do during long periods of isolation or with a group of other kids, or helping them to relax and feel comfortable when communicating with caregivers about their diagnosis.

“The gaming stations are important distraction tools that normalize the health care environment and help kids through difficult experiences,” said Julie Hertzog, CCLS, child life supervisor at Mary Bridge. “They provide choices for kids, motivate them, and give them the opportunity to have fun when it is needed most.”

Since launching the partnership in 1992, Starlight and Nintendo of America have delivered more than 7,200 Starlight Gaming stations to hundreds of hospitals across North America bringing smiles to an estimated 11.6 million seriously ill children. Previous versions of the Starlight Gaming program include the Super Nintendo Entertainment System (SNES), Nintendo 64, Nintendo GameCube, Wii, and Wii U systems.

About Nintendo: The worldwide pioneer in the creation of interactive entertainment, Nintendo Co., Ltd., of Kyoto, Japan, manufactures and markets hardware and software for its Nintendo Switch™ system and the Nintendo 3DS™ family of portable systems. Since 1983, when it launched the Nintendo Entertainment System™, Nintendo has sold more than 4.7 billion video games and more than 750 million hardware units globally, including Nintendo Switch and the Nintendo 3DS family of systems, as well as the Game Boy™, Game Boy Advance, Nintendo DS™ family of systems, Super NES™, Nintendo 64™, Nintendo GameCube™, Wii™ and Wii U™ systems. It has also created industry icons that have become well-known, household names, such as Mario, Donkey Kong, Metroid, Zelda and Pokémon. A wholly owned subsidiary, Nintendo of America Inc., based in Redmond, Wash., serves as headquarters for Nintendo’s operations in the Americas. For more information about Nintendo, please visit the company’s website at https://www.nintendo.com/.

Junshi Biosciences Announces Approval for Marketing of VV116 in China